Posted at 17:32h in Algorithmic design by Studio Archiologics 0 Comments

“This workshop explores generative design methodologies through the application of algorithmic techniques – we look at fundamental coding principles (recursion, feedback, modularity and I/O) while working within an object-oriented framework, opening the door to complex simulation and animate formation. Artificial life, material intelligence, interactivity, and other second-order principles will be approached from the vantage point of “dynamics” and “search” – or the introduction of directed intelligence into a dynamic process of making.

Development: A process in which something passes by degrees to a different stage.

Behavior: The aggregate of responses to internal and external stimuli.

Behavior and development are understood to be a sum, or aggregate, of a multitude of innocuous decisions. Each is a ‘dynamic’, or a process ‘in time’ that necessarily feeds-back and regulates procedures to promote higher levels of form, organization, and movement. Students will develop a focused inquiry into a specific area of algorithmic dynamics. Here, “dynamics” is meant as a inclusive term for all kinds of activity: formal development, flocking, embryology, automata, FEA, fractals and l-systems are all examples of time-based recursive practices. The class is meant to flesh out a vocabulary and structural understanding of a wide array of algorithms, to look for correspondences among dynamics, mapping and search heuristics. By casting a wide net, we hope to see opportunities for portability and the development of a critical stance towards algorithmic ‘tooling.’

Object-oriented programming (OOP) is a crucial part of the seminar’s approach to algorithms. Modularity is the key to moving beyond simple ‘scripting’ operations, which necessarily focus purely on geometry, towards a behavioral architecture; we wish to provoke architecture into a robust dynamism, to look for correspondences between formal and spatial articulation, environmental factors and other mediums of agency. To achieve this, we must exploit platforms such as Processing that can support spatial research at a speed, intensity and multiplicity beyond that available in the scripting languages of Maya or Rhino.

The workshop consists of two short projects: a generative procedure and a system of valuation. As a last step, we used meshing as a means to translate various types of information into topologically complex form. This workshop is an exploration of algorithmic design methodologies rather than a scripting tutorial and although some prior scripting experience will be useful, NO scripting experience is required. We are interested in the economic deployment of short, modular pieces of code that become inter-operable and give rise to complex structures and novel behaviors.” (Excerpt from syllabus, modified) 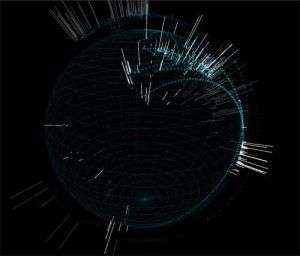 This applet identifies bands and cities as agents of the same reality -migration movements. The project is a tool to visualize in real time those particular migrations caused by precisely chosen social phenomena, such as natural disaster, economic fluctuations, human rights -or leisure.

In this case, the authors decided to deal with a more gentle cause of human fluctuations -concerts- and their visited cities. Visited locations are represented in the globe as single growing lines, -higher lines identify preferred concert locations- while each band path leaves a blue trail behind. [See applet]

Towards a new visual paradigm – Maider Llaguno and Augustus Chan

Visualization is one the fields most quickly evolving. Architecture, arguably the most “technically enhaced engineering-craft”, not only uses continuously enhances the virtually-built visual spectrum. Taking this as point of departure, “towards a new visual paradigm” embraces the new 3d-visualization technological tendencies in order to partially recreate the geometry of Aggrippa’s Parthenon in Rome, as well as to explore the possibilities of influencing, “on the fly” that very geometry in its digital form.

The user will experience a quite unique vision of the building, as well as a certain confussion as the original display is influenced by the navigation through the object itself. Red points assume those parts of the building that are more likely to be perceived by visitors through time. [See applet] 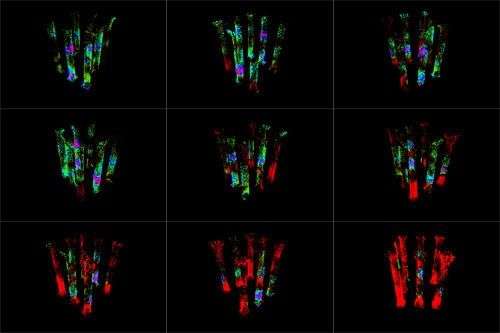 Object Oriented Programming allows for a deeper understanding of complex systems through modelization of Agent-Based_Systems. Even though this project merely scratches the surface of those complex systems and their implementation, it is a first step into the exploration of the various degrees of feedback present in those. Parallelly, a study of the several properties and states of the system is also attempted, and explicitely expressed as a goal in the project. 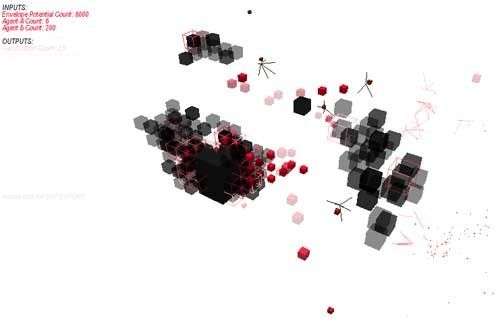 Another instance of an initial attempt to model complex systems thorugh their agent-based implementation. In this case, the system responds to its own needs, as a mirroring of those systems that depend upon their own capacity to manage resources and optimize their exploitation. [See applet]

Processing is a powerful tool when it comes to digital craft. This project explores basic processing capabilities in regard to graphical automation. 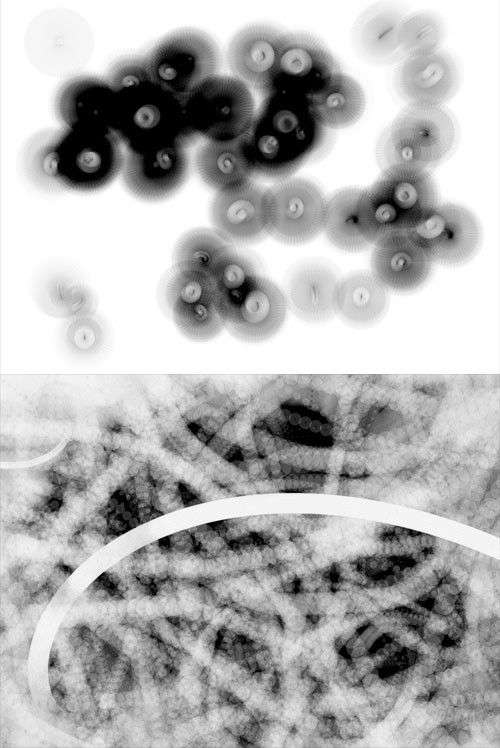