Posted at 12:14h in Featured, Projects by Studio Archiologics 0 Comments

INSERTION IN THE EXISTING URBAN FABRIC

The proposal for the new cultural and administrative center decisively bets for beautifying public spaces through a sort of “canvas of events”, a continuous park that weaves the city benefiting from an extraordinarily privileged position as well as from the existing and planned regulations. The cultural building hovers on a native plant garden and is meant to become the new hub of the historical municipality of Jesus, Santa Eularia des Riu. This will allow for a total pedestrian accessibility throughout the area as functional permeability makes it possible to weave the northern and southern boundaries. The police building is located in the most connected area, the southwest corner of Carrer de la Gaviana.

This new venue also stands as a place of attraction for the renewal of the municipality through a cutting-edge architecture that is capable of becoming a hallmark of the municipality and of preference for many investors, while offering a multitude of public functions for users of all ages and conditions: sitting and resting areas are sinuously mixed and enriched with fragrant gardens and learning areas for children under the shadow of the brand new municipal emblem.

The tapestry of events is treated as a meeting place where indivual and group activities, both outdoors and covered can be carried out thanks to the fact that the building floats above the ground level. This also allows for an area of shade in the warmer seasons.

In addition to public open spaces, the proposal includes a functional division that we consider desirable from a functional standpoint. The thesis concludes that this program can be grouped into two independent functional units: the cultural and administrative center on the one hand, and police building, on the other. This division will allow the proper functioning of both groups and independent access to the police when this is deemed appropriate and possible for phasing the project. 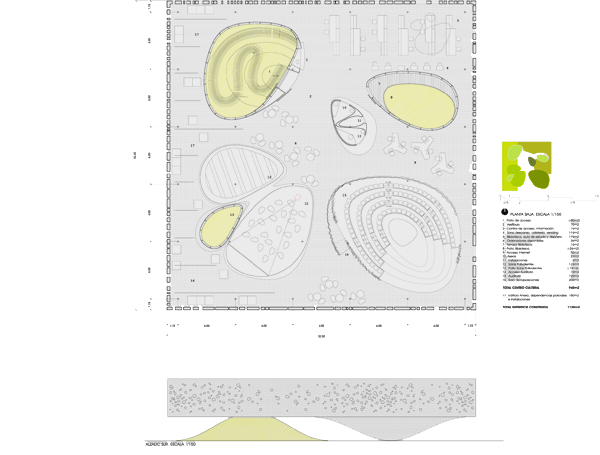 As the ground level is conceived as a sort of an oasis surrounded by different urban conditions of environment, the building itself consitutes the framework within which to organize and develop all the required cultural and administrative programme. The building is therefore a canvas of activities and events, which reality will be set daily based on its internal activity.

The proposal looks very consciously and specifically a geometric abstraction. This inner-outer duality is particularly significant: the facade is conceived as a membrane that filters the urban and atmospheric conditions sothat the interior, open and transparent, can be expressed freely in its spatial and programmatic logic.

The facade also responds to needs-based lighting, orientation, program, and exterior views, especially those of reach from the historic center.
However, this is not the only mode of interaction between the building and the environment. As shown in section, the main entrance of the park is a fold and the auditorium is a fold of the building, in order to demonstrate the relationship of mutual depedency of these two elements and enabling a natural transition between nature and architecture. 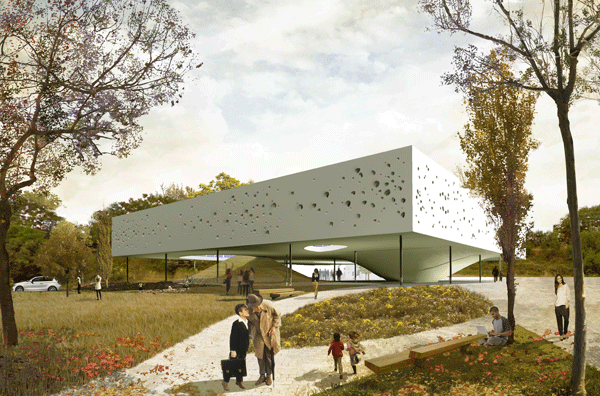 The proposal seeks, by design, to cover and frame those architectural and landscaping features that form the basis for economic viability and energy. Key design principles of sustainable vernacular architecture are thus reinterpreted, such as:
– Passive lighting control
– Use of passive energy gains control
– Simple construction
– Use of native plants with low or no maintenance requirements

Energy saving is understood not only as a series of passive systems, also the energy consumed in the construction process must be taken into account in the energy savings calculations. The proposal therefore focuses on both these measures of control and on their implementation on materials. Some of the specific passive systems adopted in this proposal are:
– Green roof
– Energy and water absorbption and reuse
– “Patio” layout
– Facade prefabrication
– Shadowing and soil release