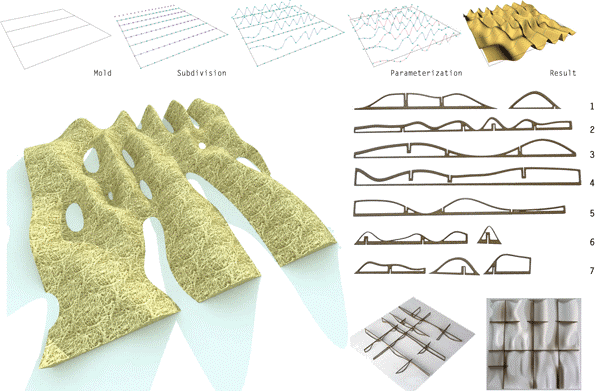 Posted at 19:05h in Prototyping by Studio Archiologics 0 Comments

Forms of collective intelligence in architecture and urban processes:
[…] developed by architects as catalysts and regulators of the built environment, those are studied through a computational process of form finding that addresses the built environment whether to enhance its functionality or to directly create it.

The workshop dealed with various forms of integrated intelligence and its various modes of interaction, focusing on the influence of simple organic materials on the built environment and its formal and rational realizations. The students were asked to design a 70cm*70cm*8cm mold as both a conceptual and physical framework to test some of the ideas presented above.

The present proposal focuses both on the digital conceptualization and its material implications through the use of new software methodologies. Software tools enable us to generate forms in a short period of time, being able to adapt them to capricious, perhaps more random configurations in iterative though controlled processes. The material, on the other hand, allows, like many others, for variation in texture, color, and transparency.

Mold use and generation process:
This study focuses on sound as medium. The overall dimensions of the mold as well as pre-configured variables make it an ideal element for sound insulation. Its thickness varies throughout the piece causing an increase in the reverberation of the item. The object retains the orthogonality within its limits but it is distorted in the interior, whereby an irregular appearance is created. The inclusion of items of mass suppression causing cavities contributes further to the irregularity of the unit.

The form emerges from an initial 5×5 mesh grid. Using a series of functions the computer distorts the intersections of the grid, generating distortion that serves as a starting point for the model. A series of parmeters are then taken into account: the first half of the elements of the initial grid is projected onto a paraboloid surface, while the other half of the elements are projected onto it simmetrical one. Holes are then created. 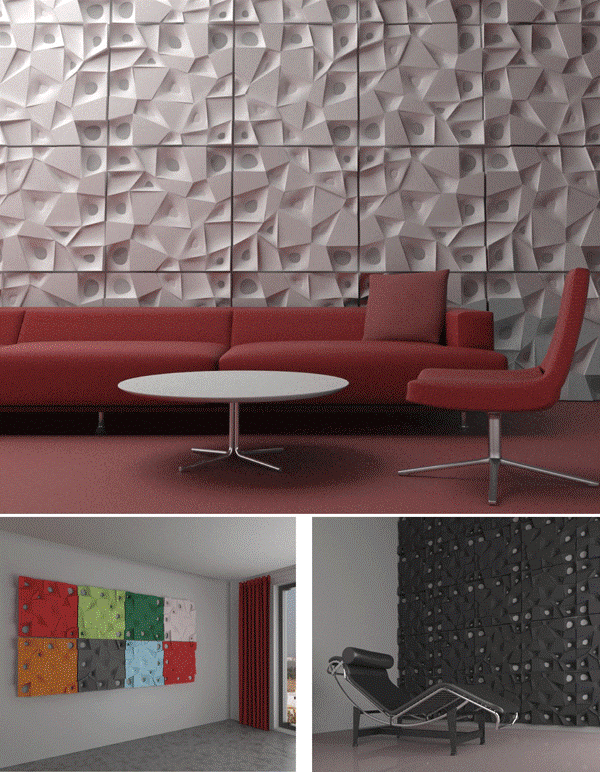 The light cell is a facade cladding component that adapts both to interior functionality and environmental conditions -sunlight, thermal insulation.
The panel seeks to mimic the organic shape of living matter through a distribution that allows for both a neutral configuration -based uniquely on the above mentioned conditions, and a formal characterization: the voronoi diagram.

The voronoi diagram, a simple distribution diagram, is used to create areas of diverse lighting conditions through two main techniques: point density control and panel thickness. On the one hand, the point set distribution responds to desired lighting control -higher density means higher illumination, on the other, the panel thickness itself allows for further transparency control, as the least populated areas completely pierce the final piece, allowing for total transparency and visibility.

The final shape is then qualified by design. In a first attempt, a one-sided panel cast is created, permitting funghi to be normally poured. The fact that this method leaves one side completely open ensures the correct “breathing” of the organic material. A second attempt slightly modifies the initial cast, mirrors it, and creates a well finished two-sided cladding piece [for complete process see animation above or the youtube video].

“From the outset we were interested in the potential importance of lightning as design parameter, which will both bias the whole parametric system and design rules.” [from abstract]

“We defined, through a gray-tone image, illumination values which correspond to those of the facade panels -each pixel is read by a specific panel, a “location” on the facade. This design parameter is taken into account for subsequent implementation steps. The facade, therefore, has no holes nor large windows, and is conceived as a perimeter wall that is tread and thought through the parametrically generated holes and to filter and characterize the sunlight”.

The panel structure, as opposed to a more conventional rib model, is conceived as a continuous layer, a sort of framework where the funghi will weave themselves through. The holes also require a well-finished frame, which is achieved through the bevel on which the structural -and ornamental- layer is placed. This allows for an accurate shape that can be adapted to various types of light-transparent materials, such as glass or carbon fiber. 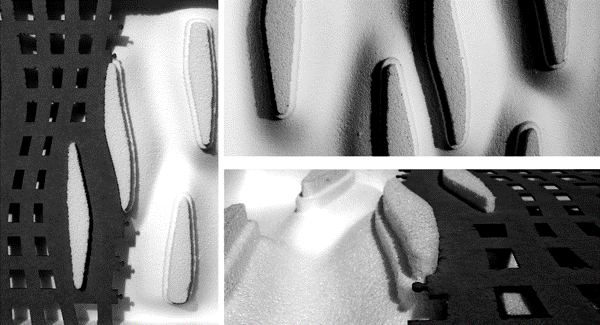 “The model stems from the intention of creating a single, continuous, organic-like surface to emulate the tension of the internal structure of fungal growth on a larger scale and represented by the geometry of building components. In other words, we use the panels as a large-scale expression of the implanted funghi’s inner structure.

In order to achieve this effect, we consciously simplify the organic to the random nature, using a fibrous structure in which the tensions seamlessly disintegrate.
This draining is carried to the limit in the lower part of the model, thus enabling screening of natural light.

Parameterizing the breadth and length of waves through simple trigonometric functions,we obtain muscle-like fibers. These waves are coupled organizing an undulating surface capable of assuming different uses according to changes of scale.

The structure is a distributed rib grid that conforms to the shape of the mold. The design of these ribs has changed in the assembly process, keeping the old profile but emptied to facilitate the continued growth of the fungus.” 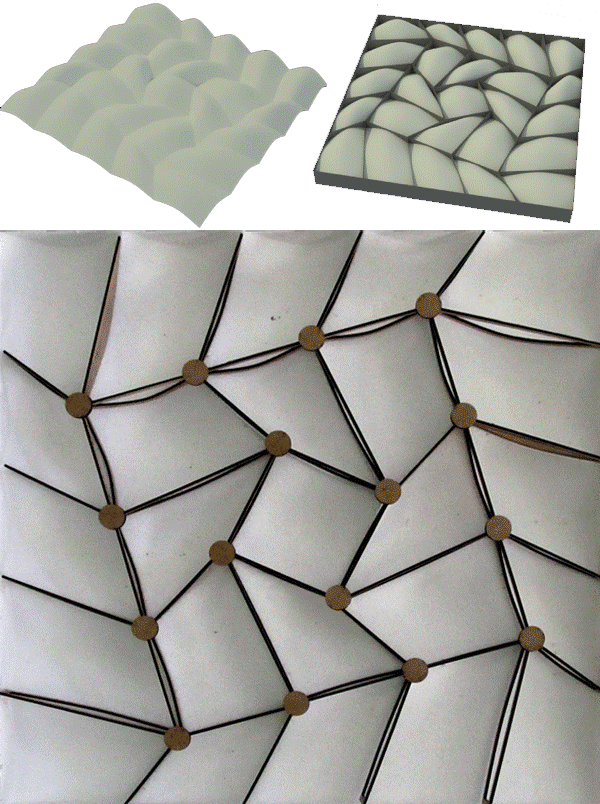 This design attempts to mimic the structure of lithic flakes. This is a facade panel that can be used by design as insulating coating or for acoustic purposes. Its symmetry permits the module to be extended to finite.

MAIN FABRICATION STEPS:
1. Mill the mold
2. Sand and clean the piece to remove impurities
3. Add two layers of latex to seal the surface and regularize the structure
4. Laser-cut structural ribs
5. Design and fabricate the joints
6. Mount the structure following the code
7. Overlap the rib structure and mold
8. Disinfect and prepare the cast as bed for the fungi [organic material]
9. Plant fungi seeds in a bed of compost and/or agricultural waste
10. After a period of approximately two weeks, the fungus will adhere to the surface