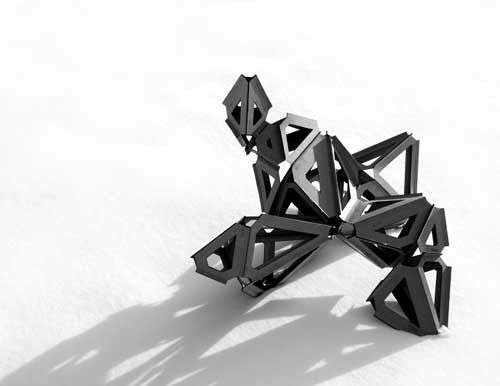 Posted at 19:53h in Prototyping by Studio Archiologics 0 Comments

With Mark Bearak and Brigette Borders

“… exploring the intrinsic relationship between parametric algorithms and material explorations.

Parametric modelers are commonly used in the development of digital architectural models, but they are rarely taken to the point of becoming physical realities. This course will look at the process of generating parametric algorithms then turning those models into physical realities. Students will work in groups to design an installation that will be the physical realization of their scripted protocol.

Students will work in groups to design an installation that will be the physical realization of their scripted protocol. Groups will develop mathematical algorithms using parametric modelers such as Rhino.script, Grasshopper and Generative Components. Concurrently students will be testing modeling techniques in order to create a prototype for their final physical system. Students will then take their digital models, rationalize them, and physically construct the system using a material process from their prototype.

Students will start by researching certain room typologies such as wall panels, lighting elements and furniture pieces; each group will choose an element that will be used as a seed for their scripted cells. Students will use parametric modelers to generate their individual cells while keeping in mind the constraints of physical materials. Over the course of the semester students will apply specific techniques to differentiate their cells in order to create a series of distinct modeled elements. While students are developing their differentiated cells they will start testing their proposed modeling technique based on a single modeled cell. Students will streamline the modeling techniques that will generate a 1 to 1 prototype of one of their cell.” (Excerpt from syllabus)

This project aims to create a place of intimacy through a thin, tensioned surface. Mylar pieces are punched together seeking an optimal pattern of light and material, the most controversial density and porosity conditions to enable movement and calm, solitude and company at the same time. 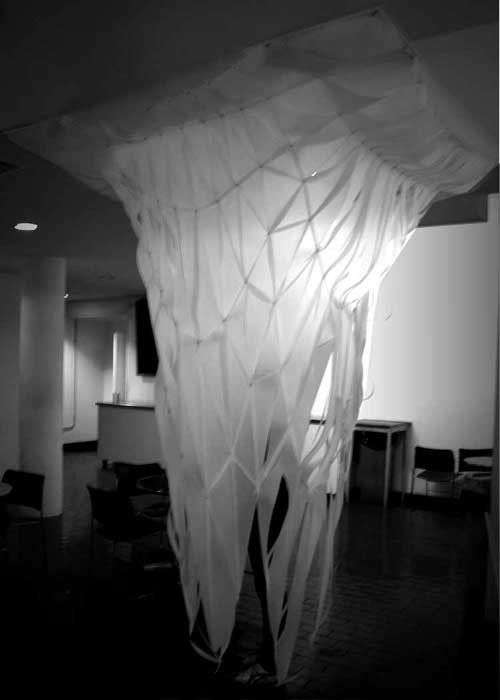 A completely automated process allows for absolut control of this proposal’s mode of production. From its formal state to its physical manifestation, code is not only the means for idea translations, but the absolute design driver of the sculpture. The team decided to create a spatial object that could be displayed under different environmental conditions, for which they wrote a code that would ultimately control the ideal and material production: this is, from the very shape of the object to the assembly of its manyfold -yet rationalized- components.

The result is a highly complex system through which different outputs can be studied. The one hereby presented is merely a case study, one formal manifestation among the very many possible options the systems can create. 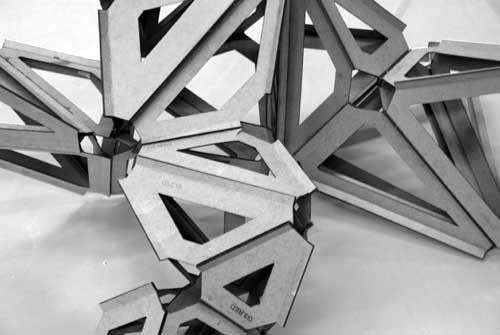 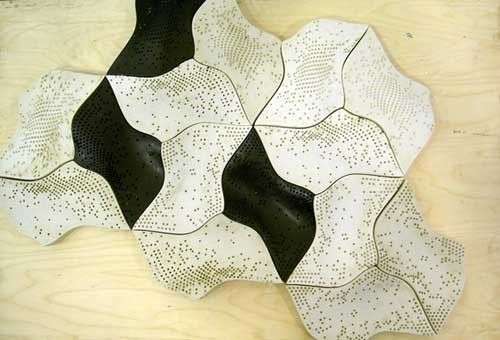 Casting offers numerous possibilities of expression in fabrication. This project puts into question the artificiality of the distinction between vertical and horizontal facings and paraments in architecture through the hybridization of a surface and its very inner structure.

The components are casted as single parts of an hexagon, which is the closest shape to optimal surface coverage. As such, the casting process opens up a wide varidety of possibilities regarding expression through material, which are explicitely taken as pattern recognition devices.

Whether located vertically or horizontally, this projects offers a unique experience of otherwise neglected surfaces. 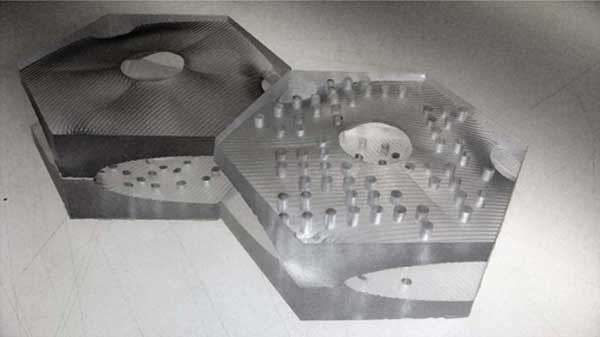 Geometry is for architecture an endless source of inspiration and admiration. Minimal surfaces, among others, expand architectural limits due to their surface and structural properties: minimal surface is one which mean curvature is zero. “These include, but are not limited to, surfaces of minimum area subject to various constraints. Physical models of area-minimizing minimal surfaces can be made, among other procedures, by dipping a wire frame into a soap solution, forming a soap film, which is a minimal surface whose boundary is the wire frame” (wikipedia).

This project takes triply minimal surfaces as inspiration to create a casted, tilled wall. As in the example above, the intention is to create variability from the capacity to assemble a unique, coherent piece from many interchangeable prefabricated parts. The designer -or even the final user- could then decide which particular aggregation would suit his/her interests best, and develop profound new agglomerates each time. 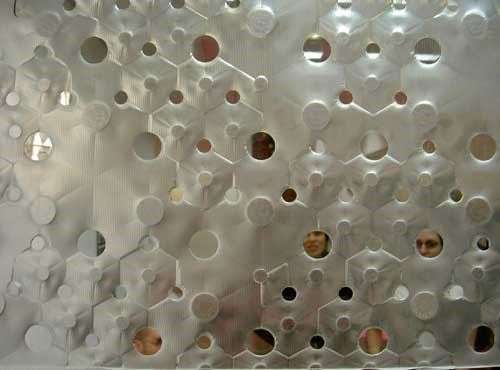 As opposed to other above presented examples, this proposal deals with explicitely generated geometry. Designed for a specific place, this installation constitutes a significant attempt in the detailing of component-based surfaces. Every component is the result of the triangulation of the crafted surface. Every piece, then, is further explored in terms of porosity and lightness, in order to optimally distribute the work’s own weight and other stresses through the structure. The result, as can be seen, is a higly precise, self-bearing installation. 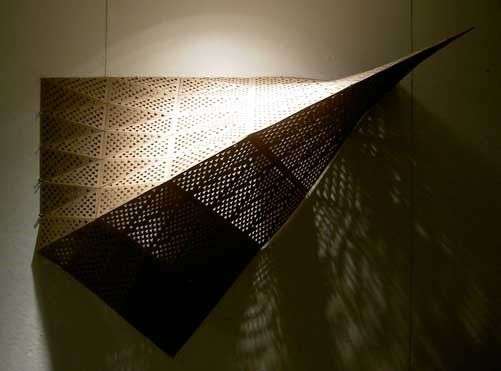