Posted at 18:10h in Algorithmic design by Studio Archiologics 0 Comments

“This seminar examines the role of agency within generative design processes. The course engages algorithmic techniques in the development of a computational methodology grounded in swarm intelligence. While discussing the political and social role of agency, the workshop will focus on an abstract design methodology, recasting simple decision making ability into agents capable of self-organizing into an emergent intelligence. Scripting will form the basis for algorithmic models which enable localized interaction of agents to generate emergent topologies in the design of proto-architectural forms, structures and articulation. Unlike the typical application of swarm systems in design, this workshop does not simply engages in the mapping of these complex systems, but instead, we will mine the self-organizing potential of the systems to negotiate between a complex set of desires and parameters in the generation of architecture.

The semester focused around two areas of research, initially developing simulations of vector based swarm systems and then using these as the basis for developing an architectural design methodology which operates within a topological substrate. This second stage of the research logically shifts away from any analogous relationship to an existing swarm systems model and aims to develop a design process capable of negotiating architectural inputs.

Computational design is shifting away from the reliance on heavy platforms such as Maya’s MEL scripting language into lightweight object oriented programming environments, enabling the massive iteration required for emergent processes. In anticipating this shift, the workshops will focus on the newer lightweight languages such as Processing and Python. As the research shifts into a topological substrate these languages will be transferred into Maya (Python) and RhinoScript to enable agent intelligence to be embedded into geometry.” (Excerpt from syllabus, modified)

Ornament is widely treated as an addition to other architectural components. The belief that ornament is mere cladding, or an attached component to the “raw” design in architectural practice is one of the questions to be put to the test. This experiment searches a common ground for both structure and ornament, trying to define not their boundaries but points in common, dependencies and relationships. 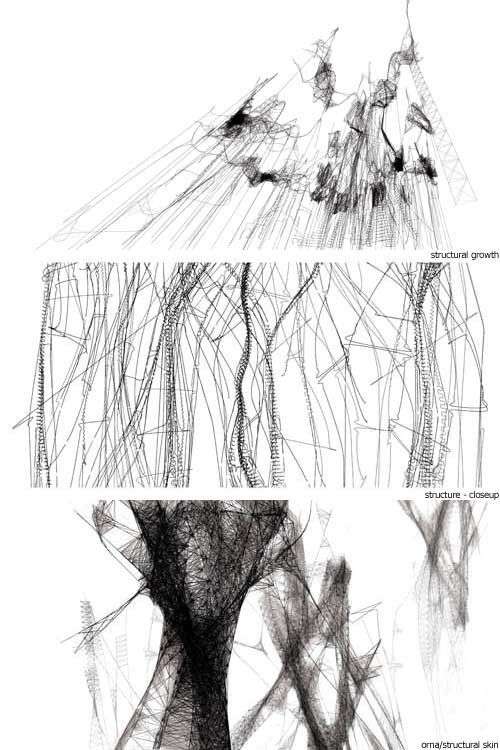 A study of synchronized and asynchronized patterns as a further development of clapping in a defined crowd. 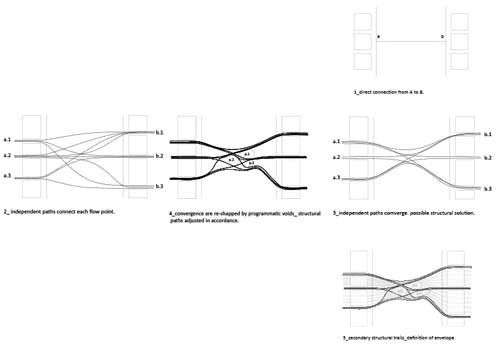 This is an attempt to directly apply an agent based system to a real situation: the issue here was to create a bridge in a location of London by means of a virtual modelization of crowd behavior and its response to conditions external to the system. [See applet] 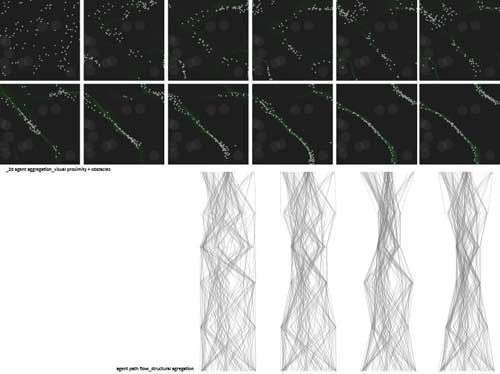